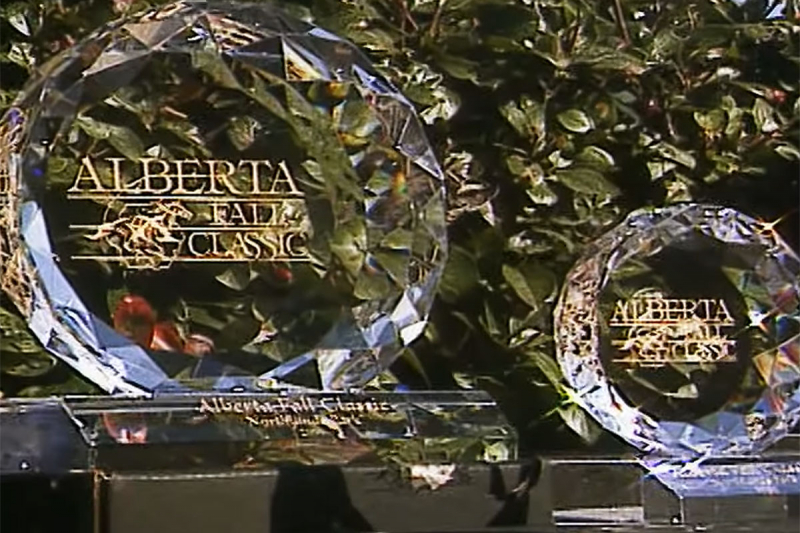 Don Danard is about to be very active. Saturday is the 25th anniversary of the Alberta Fall Classic program - a series of seven $50,000 stakes races for Alberta-breds at Century Mile. Danard has at least one horse nominated in six of them. "To say the least that's quite a few," said Danard. "I'm going to be busy. A good busy. Hopefully I can win one or two of them."

The only one of the those races that Danard doesn't have at least one horse nominated is the Alberta Breeders'. "I'll be running at least five of them for sure and probably six," said Danard. "I don't know if anyone has ever run in that many Fall Classic races before. Maybe Riversedge but outside of them I don't think so."

Through the 25 years of its existence Danard and his partners have won three Fall Classic Races. "One of the wins was wth Tyko Tycoon in the Red Diamond - a race I sponsor. I owned him with Joe Fenrich so I got to present Joe with the trophy," said Danard. "That was pretty neat."

Another Fall Classic race Danard won came with Onestaratatime in patnership with Adrian Munro's Highfield Farms. Onestaratatime was sent off as the very heavy 1-5 favourite in the 2016 Alberta Oaks when she won her fourth straight race.

"Fall Classic Day has something for everyone," said Munro. "It's an event, it's a great day and it continues to get stronger. It's an opportunity to get the fans, owners and breeders back and celebrate Alberta-breds. Last year betting was a record $1.3 million which surpassed even the Derby handle. That shows that the fans like it. It delivers competitive fields and hopefully we get there again."

Entries for the Fall Classic were taken on Tuesday morning. There appear to be two standouts in the Fall Classic array of stakes races: Greek Geek in the Alberta Breeders' and Flashfordani in the Premiers. Greek Geek has crossed the finish line first in his last four races - albeit getting disqualified in one of that quartet of wins. Flashfordani won the won the Birdcatcher by 3 1/2 lengths in his last appearance; he was also second in the Canadian Juvenile.

But the other five races are all expected to be deeply contested. "I really like the Alberta Fall Classic program," said Danard, which is hardly surprising given that he, Larry Carter, Rene Gellner and John Fowlis were all big proponents of getting the Fall Classic started 25 years ago.

"It's a great day for the breeders and the owners," said Danard, who owns all or parts of 20 horses and who has owned over 100 horses in his association with thoroughbred racing. "It's not just one race. It's seven races for every category: two-year-old colts; two-year-old fillies, three-year-old colts; three-year-old fillies, sprinters and route horses. It brings together a cross section of the breeders and owners in a series of restricted stakes races for horses that may not quite be ready to win an open stakes. It's Alberta-breds only. So it's a chance for just about anyone to go for the big one."

Danard, currently the vice-president of the Alberta Horsemen and Protective Association, got his first start in horse racing in 1974 when he bought a two-year-old filly named Swift Spring in Phoenix, Ariz. The following year Swift Spring won the Junior Miss stakes with Freddie Jones training and Rick Hedge riding.

"It was probably the worst thing that could have ever happened because I thought how easy is this?" laughed Danard, who probably should have won the 1990 Canadian Derby. I thought we had the race won but then the horse I was running, Key Timing, went wide around the last turn and let Hurricane Benny come through on the inside. The jockey went to sleep."

In his next race Key Timing won the Speed to Spare by 10 lengths; Hurricane Benny never won another race. Getting involved in thoroughbred racing came naturally for Danard given that his father Don Sr. had a farm - Red Diamond Farms - north east of Edmonton which wintered a lot of horses including prominent thoroughbreds for Lee Williams and Jimmy Charlesworth - two of the biggest owners of that period.

"When I was just a teenager I'd hot walk horses. I just liked it which I really still do to this day," said Danard. "I like the thrill of watching your own hoses run. It's like watching your own kids in sports."

As usual Danard was prominent at the recent Alberta Yearling Sales. He bought two yearlings including the sales topper - Hip No. 30 - an Alberta-bred son of Value Plus out of the stakes winning mare Holiday Maker, who earned over $150,000 and who is a half-sister to the $500,000 earning stakes winner Adore. Danard and his partner Don Knight paid $32,000 for him. "He's a big, good-looking colt which has the pedigree to match his looks. Looks don't tell you everything but they tell you something," said Danard, who also bought a Shaman Ghost filly with Knight for $16,000.

The Sept. 17 sale saw strong demand for quality. Gross sales were $405,600 from 37-sold yearlings which was up substantially from last year when 39 yearlings sold for $327,400. Moreover, the median price for a yearling increased from $4,500 last year to $9,500 this year. The second-highest purchase was $25,000 for Hip No. 21, an Alberta-bred son of Tapiture - a stakes winning son of Tapit - out of Carmen's Kiss, who has had two foals to race - both winners. The buyers were Shot in the Dark Racing Corp.

Danard said the Fall Classic Day is integral to the selling and breeding of Alberta-breds. And, he said several incentives which were just introduced also helped the sale. Next year the Two-Year-Old Fillies Sales Stake and the Two-Year-Old colt and geldings Sales Stake will be merged into one $100,000 Sales Stake as part of a Canadian Sales Stakes series with annual purses totalling over $1-million.

Furthermore, there will be Alberta-bred Maiden Special weights written once a month for a purse of $35,000. And, under the new Alberta-Sired program, any Alberta-sired two-year-old will receive a one-time bonus of $5,000 when they break their maiden at any level at Century Mile. Other incentives for Alberta-breds will also be introduced.

More in this category: « "Horses are amazing athletes"— a conversation with Ryan Nugent-Hopkins "The shoes have been pulled" — Trooper John taking a well-earned retirement »
back to top