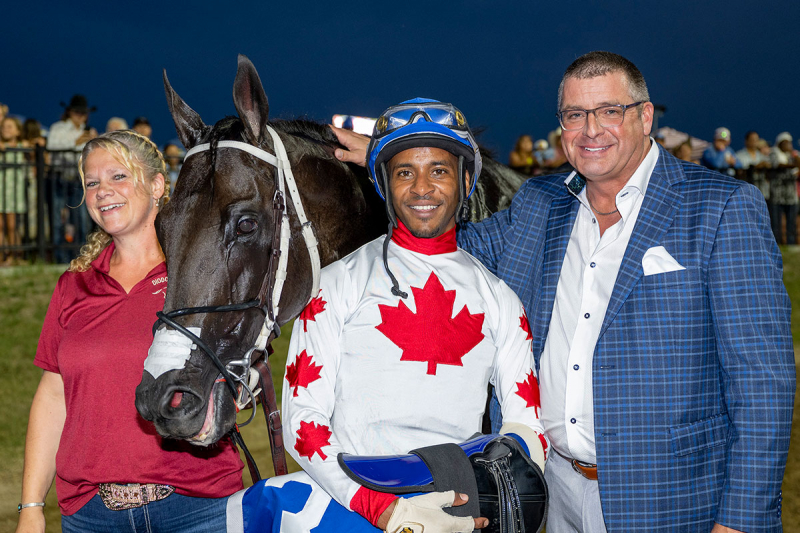 Walcott easily won a record fifth Canadian Derby at Century Mile Saturday evening with Great Escape. Four of those wins have been for Diodoro. “I give all the credit to Robertino,” said Walcott after his track record shattering performance winning by three and a half lengths over stablemate Red Knobs while getting the mile and a quarter in 2:01.35.

“Down the backstretch I was thinking this is crazy. It was the same as it was in Winnipeg,” said Diodoro. “Except that it was just the opposite with Red Knobs in front and Great Escape running in second.

“I didn’t really tell Rico or Jorge (Carreno, the jockey for Red Knobs) very much. I just told them not to get too far off the pace because you’re not going to make up a lot of ground on this track. With two experienced riders like Rico or Jorge you don’t have to say much,” said Diodoro, one of the top trainers on the planet who got his start in the business training in Alberta and who has now won 2,920 races for earnings of $57.6 million. Diodoro also won the 2013 Derby with Broadway Empire, the 2014 edition with Edison and the 2018 Derby with Sky Promise. As well as those three horses and now Great Escape, Walcott also won the 2010 Derby with No Hesitation.

“Awesome,” said Diodoro, as he hugged Walcott in the winner’s circle. “Even Robertino was impressed and he’s not an easy guy to impress,” said Rollingson, a dentist from Lethbridge.

But then it would be very hard not to be impressed. Not only did Great Escape win easily his track record performance was almost three full seconds faster than the previous record was of 2:04.16 - set in last year’s Derby by Uncharacteristic.

The race began with Great Escape taking the early lead but then allowing Red Knobs to move up the rail first time past the grandstand. “Nobody seemed to want the lead,” said Carreno. “So I took it. He was very comfortable on the front end.”

A big part of the reason why the lead was virtually uncontested were the fractions. The first quarter went in 22.41 and half a mile in 45.35 - sprinting speed.

Red Knobs and Great Escape separated themselves from the rest of the field by about four lengths down the backstretch. With six furlongs flashing by in 1:09.53 it was already a two-horse race: Diodoro running first and second.

“It’s these two,” said track announcer Dylan Beardy with Great Escape and Red Knobs drawing clear by half a dozen lengths. And only those two until Great Escape decided to take matters into his own drawing clear and sprinting away into the encroaching darkness at the head of the lane.

“I knew then I had Red Knobs,” said Walcott, after pumping his fist high into the warm air and then thrusting both hands skyward in the crowded winner’s circle. “I was just worried about somebody else coming from behind.”

No one did. Walcott and Great Escape ran away opening his lead with every stride down the stretch. Galloping out strongly after crossing the finish line it looked like Great Escape could have run another lap. Regal Riot made a late bid to almost get second but fell short by half a length.

“After the Manitoba Derby both horses shipped well to Edmonton. They both trained well at Century Mile and then they both worked well and then they came out of that work well,” Diodoro said of an easy, but quick, four furlong 46 4/5th’s work eight days before the Derby. “There’s a lot of things that have to happen to get a win. But everything unfolded perfectly.”

“(Red Knobs) ran great,” said Carreno. “Today was different than the Manitoba Derby but I’m very proud of him. Still, I’m always thinking of winning especially in an important race like this.” A Kentucky-bred who was bought for $200,000 as a yearling and who broke his maiden last September at Churchill Downs defeating the great Epicenter who was the runner-up in both this year’s Kentucky Derby and Preakness, Great Escape was then bought privately by his current owners for an undisclosed price.

STOCK REPORT - As well as a track record and a record five Derby wins for Walcott the wagering was also easily a record at Century Mile with over $1.9 million wagered on the 11-race card.

There were three other stakes on the Derby program. Infinite Patience, co-owned by Edmonton Oiler forward Ryan Nugent-Hopkins, won her eighth race in a row winning the Northlands Distaff Handicap by seven lengths in a track record 1:33.65 for the mile.

At Attention won the Century Mile in a three-horse photo by a neck over Chase the Sun and another head over Uncharacteristic for his third victory in his last four starts.

Like Infinite Patience, At Attention is trained by Vancouver’s Barbara Heads.

And, in the nightcap, Tone It Up, trained by Dave Nicholson won the Century Mile Oaks by a neck over U Did It.

We’ll get to a closer look at those three races later this week.

More in this category: « Canadian Derby Notes Infinite Patience just keeps writing a story better than the one before »
back to top