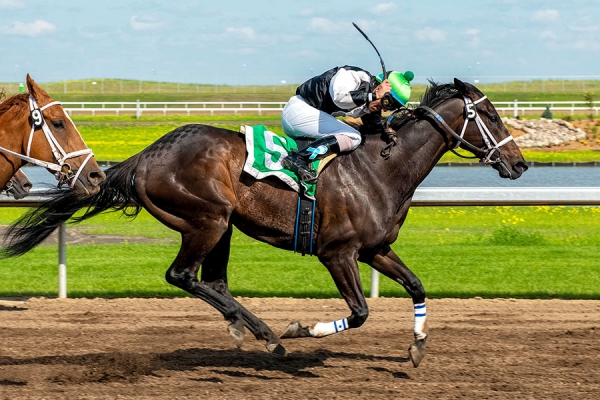 If possible, Sir Bronx is only getting better. Last year the six-year-old owned by Brian and Janet Alexander was named Alberta’s champion sprinter and champion aged horse when he won four of 11 starts. This year, evidenced by his extremely gritty victory this past Sunday in the Don Getty Handicap at Century Mile, he seems to have somehow even found another gear.

They came at Sir Bronx early in the Don Getty. First he had Killin Me Smalls, the nine-year-old veteran who showed more than he has in quite a while, to his inside and the rapid Spangled Jimmy stakes winner Stone Carver to his outside. Then they came at Sir Bronx late with Shimshine, who, as long as it’s not in the mud, always gives it his best, and longshot Red River Bear, bearing down on him.

But they still couldn’t stop Sir Bronx from entering the winner’s circle. Sure, that’s because Sir Bronx is tougher than a $5 burnt steak. He just doesn’t quit.

But a lot of credit for the victory also has to go to jockey Rigo Sarmiento for what he did in the middle portion of the mile and an eighth $50,000 race: he put on the brakes, took Sir Bronx out of the speed duel and allowed him to settle in third place behind Killin Me Smalls and Stone Carver.

“If Sir Bronx gets the lead by himself he races well too,” said Brian Alexander. “But to have had the three of them jamming would not have been good. He probably would have got banged around in there. Rigo did the right thing. The smart thing. He’s a horse that can run on the lead or from off the pace. You don’t have to stick with a Plan A. He can adapt to a Plan B. If nobody wanted the lead on Sunday he would be laying on the front end. We left it in Rigo’s hands. When Rigo saw that they were going to be running three abreast he let Killin Me Smalls and Stone Carver go.”

And then when Sarmiento could wait no longer he pushed on the accelerator and Sir Bronx responded the way a good horse does: he took up the chase again. “Strong. Strong. Strong,” said Sarmiento, who said Sir Bronx didn’t try and fight him when he eased him out of the early speed duel. “He relaxed. Then at the three-eighths pole he took off again."

“Strong. Strong. Strong,” repeated Sarmiento. “He’s a tough, tough horse,” said Alexander. “If he had lost you couldn’t have faulted him. He gave it everything. He seems to dig in when he gets pressed. He’s a racehorse at heart. When he’s asked he seems to give a little more.”

The win was Sir Bronx’s second of the season having also won his 2019 debut in a conditioned allowance race coming off a well-deserved two and a half month rest following a brief winter campaign in Phoenix.

In between was a second to Gem Alta in the Fred Jones. “That was a really good race too,” said Hedge. “Seconds are good and this was a really good second. Gem Alta seemed to really like the mud that day. And when you watch the replay you can see that Gem Alta and Sir Bronx were really pulling away from the third and fourth-place finishers. And that was his first start of the year going more than seven furlongs. I thought and hoped that the Fred Jones would set him up to run even better in (the Don Getty). Fortunately I was right.”

“He never really got a breather in the Fred Jones,” said Alexander. “But this time Rigo gave him one and he kept running.”

The Alexanders purchased Sir Bronx for $50,000 - the same fall Kenneland Kentucky sale that they bought champion Tara’s Way at for $45,000. Brian studies the breeding while Janet looks at the horse’s conformation. “I liked the Tiznow on the mare’s side cross with Bellamy Road. And we both loved him when we had him taken out of his stall - one of a gasping 500 horses at the sale that they looked closely at. He was on both of Janet and my short list.”

Initially Sir Bronx and Tara’s Way were both sent to Toronto’s Woodbine racetrack. But with neither horse running to their potential in 2015 and 2016 the pair were sent to Alberta when they turned four.

“We just thought they would run better on dirt than the polytrack at Woodbine.” It was a wise decision. On Woodbine’s synthetic surface, Sir Bronx won one of his 12 races. Tried once on the turf in Phoenix he finished eighth. But on dirt it’s been a different story where he was now won fully half of his 18 starts.

“What can I say?” said Brian. “He likes dirt.” And he really seems to like Alberta’s dirt. He showed that immediately winning his first three starts. Included in that streak was his win on the 2017 Derby Day card when both he and Tara’s Way won: Sir Bronx taking the Timely Ruckus and Tara’s Way running away with the City of Edmonton Distaff.

Then, as mentioned came last year when he won four times. “Last year was phenomenal,” said Alexander. “He got tired at the end of last year and we gave him a break.”

Now there’s this year. “Knock on wood, he’s as good or better than he even was last year,” said Alexander.

“But in this game that can really change from race to race. We’ve got our fingers crossed that he stays sound and keeps running the way he is.”

The Alexanders, who have owned thoroughbreds for over 30 years have long maintained that Sir Bronx’s and Tara’s Way’s success have been a team effort. The horses. The trainer. The exercise riders. The jockeys. And especially the horse’s groom, Kirbi Pfannmuller.

“Kirby earns her weight in gold. We all really appreciate what she does because Sir Bronx because he can be a little difficult in the stall. She knows how to handle him.”

Sir Bronx isn’t an easy horse to gallop either. “He likes to go,” said Alexander. “You have to have somebody strong on him or he’ll run off. He’s just a race horse through and through.”

In Sunday’s other feature, the R.K. ‘Red’ Smith, five-year-old Daz Lin Dawn returned to some of the brilliant form she exhibited when she was a perfect seven for seven - all stakes - as a three-year-old at Vancouver’s Hastings Park two years ago.

That remarkable performance earned her a sweep of B.C.’s thoroughbred awards taking Three-Year-Old Filly of the Year, Horse of the Year and B.C.-bred Horse of the Year. Even her dam, Summer Bay, won Broodmare of the Year. Sent to the top and chased by Blue’s Roar, Daz Lin Dawn never looked back holding off the late bid of Smart Fix, who rallied from last place, to win by an open length.

“Last year she was just not mentally in the game,” said trainer Nancy Betts. “We gave her the winter off and she came back with a new disposition.”

While it took Daz Lin Dawn four races to win this year she was competitive again finishing third in a stake at Hastings and again in the mud in the RedTail Landing at Century Mile. And those were all at distances under a mile. “She’s a horse that likes a mile and a sixteenths a lot better than six and a half or seven furlongs,” said Betts of the horse owned by Deltin Stable and Ed Welsh.

The bad news for Alberta horsemen is that Daz Lin Dawn is going to stay in Edmonton. “We’ll see how she comes out of this race. It’s one race at a time,” said Betts.

More in this category: « Winning the Canadian Derby would be a boyhood dream Walcott back in the saddle, Badrie riding high »
back to top